Recently, Mr. Thomas So, President of the Law Society of Hong Kong, has expressed his concern over the obsolete Solicitors’ Hourly Rates (“SHR”) and is disappointed that no significant step has been taken to revise the SHR since 1997[1].

Why the revision of SHR is so important to an impartial legal system?

SHRs are set to determine the Solicitors’ fees assessed at the conclusion of a civil litigation. However, SHR has not been reviewed since 1997 and therefore, it cannot reflect the actual rate charged by law firms in the current legal market (which has been increased significantly over the past 19+ years due to the increase in labour costs and other operation costs, inflation and better services and deliverables, etc.). This therefore always results in the low recovery rate of legal costs actually incurred and to a certain extent, deter the public to go for litigation even with a meritorious claim.

What’s more, the difference between the legal fees paid to their lawyers and the total sum recovered under the court order is becoming greater and greater over the years. From the Independent Consultancy Report in 2013 (“2013 Report”) prepared by KPMG for the Law Society of Hong Kong[2], the actual hourly rate is generally 55% greater than the existing SHR and the difference will be even greater over time. Going forward, it would be more difficult for the wining parties to recover their legal costs and they may end up in settling cases in less favourable terms simply with a view to saving costs. As such, this may result in a denial of access to justice to parties of different financial strength.

The Law Society of Hong Kong recommended SHRs for High Court and District Court from the 2013 Report are listed below: 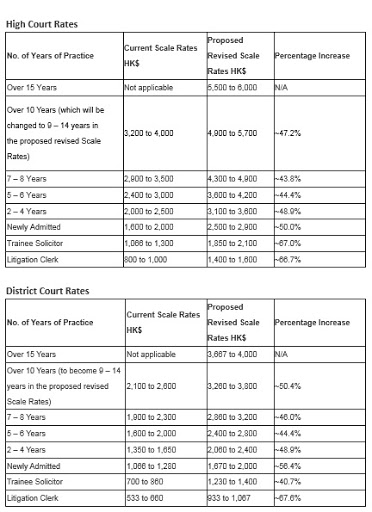 In view of the above difference, the Honourable Mr. Dennis Kwok, the Legislative Councilor representing the legal functional constituency, also echoed that “this would not only affect the work and interests of the Solicitors but would also have a much broader impact on many stakeholders in the community at large in the overall context of access to justice.[3]”

We, having a heavy focus on IP litigation in Hong Kong, also hope that the Working Party[4] (set up by Judiciary in 2013) to complete the review of the SHR and implement the new rates as soon as practicable so as to improve the fairness of our legal system and maintain the competitiveness of Hong Kong as a leading Dispute Resolution Centre in Asia.